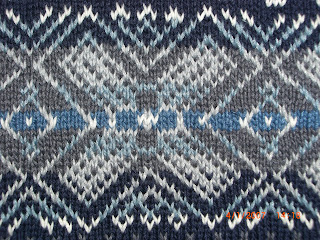 I’ve decided to create a knitting bag from the same designs as the Stormy Sky sweater (c) 2007 Fiber Rhythm Craft & Design. (see links)
One of the main reasons is I have had to send the sweater off to TKGA and don’t expect to get it back for several months. I miss it!
So stranded knitting for the outside of the bag, and plain for the inside. I’m designing it so that you knit in the round, and then “steek” for the openings for the bag. This should be a nice way to both practice steeking and to perhaps use up some of the left-over yarn.

The bamboo yarn I used for the Stormy Sky sweater comes on cones and the sweater doesn’t use the same amount from each cone. So I had quite a bit of denim color used, but not much of some of the other colors. So I figure I can knit the outside to match, and then the inside can use some of the colors I have more of. So that should be good.

I was thinking of writing the pattern up to have two versions: 1 with a flap that would fold over to close the bag, and one without the flap. So I’m curious whether people would be interested in having a bag without flap v. one with.

I’m expecting this to be a project bag– so a strap long enough to go over the shoulder, if not cross over… and the bag part large enough to hold 8-1/2″ x 11″ instructions as well as yarn and project…

We use cookies on our website to give you the most relevant experience by remembering your preferences and repeat visits. By clicking “Accept All”, you consent to the use of ALL the cookies. However, you may visit "Cookie Settings" to provide a controlled consent.
Cookie SettingsAccept All
Manage consent

This website uses cookies to improve your experience while you navigate through the website. Out of these, the cookies that are categorized as necessary are stored on your browser as they are essential for the working of basic functionalities of the website. We also use third-party cookies that help us analyze and understand how you use this website. These cookies will be stored in your browser only with your consent. You also have the option to opt-out of these cookies. But opting out of some of these cookies may affect your browsing experience.
Necessary Always Enabled
Necessary cookies are absolutely essential for the website to function properly. These cookies ensure basic functionalities and security features of the website, anonymously.
Functional
Functional cookies help to perform certain functionalities like sharing the content of the website on social media platforms, collect feedbacks, and other third-party features.
Performance
Performance cookies are used to understand and analyze the key performance indexes of the website which helps in delivering a better user experience for the visitors.
Analytics
Analytical cookies are used to understand how visitors interact with the website. These cookies help provide information on metrics the number of visitors, bounce rate, traffic source, etc.
Advertisement
Advertisement cookies are used to provide visitors with relevant ads and marketing campaigns. These cookies track visitors across websites and collect information to provide customized ads.
Others
Other uncategorized cookies are those that are being analyzed and have not been classified into a category as yet.
SAVE & ACCEPT