It’s been a pretty good year so far. We started out with the entire family making it to midnight on New Year’s Eve. A first for many years, and nice. I’ve been working on the CYCA Teachers Certification program, and got the package for Phase I sent off on New Year’s Eve too. So my interview is soon. Then onto the 2nd portion. That is one of the things I have planned to finish up in 2008. 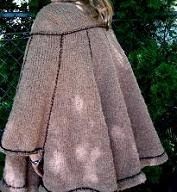 I also want to make progress on the knitting machine front. I was gently prodded from a Ravelry user (thankyou!) and have finished writing up the Bouclé Swing Cape pattern. I designed it and knit it in 2006. Good thing I took great notes (and could find them again). So that pattern is also now available on our Fiber Rhythm Craft & Design shopping cart site. It was designed for a Shetland Wool Bouclé yarn and is knit on the Vario Big Knitting machine.

On the hand knitting from, I’m still working on Stormy Sky II — a Jamieson Spindrift wool version of the Norwegian Style Bamboo Sweater that I made for TKGA‘s Master Knitter program. Its coming along nicely. I’m up to the yoke, so the knitting takes more concentration right now.

Also on the teaching front, I’ll be teaching an Entrelac class at Twisted again this month, and the Stranded knitting there next month. I’ve submitted ideas for the TKGA program, but haven’t heard anything back from them.

On the design front, I’m hoping to send some off to other people’s publications this year. Much of that depends on how much time I have left over after the day job. I’m hoping it starts off slow this year, but its not looking that way yet. Lots of projects were pushed into 2008… But its all good.

We use cookies on our website to give you the most relevant experience by remembering your preferences and repeat visits. By clicking “Accept All”, you consent to the use of ALL the cookies. However, you may visit "Cookie Settings" to provide a controlled consent.
Cookie SettingsAccept All
Manage consent

This website uses cookies to improve your experience while you navigate through the website. Out of these, the cookies that are categorized as necessary are stored on your browser as they are essential for the working of basic functionalities of the website. We also use third-party cookies that help us analyze and understand how you use this website. These cookies will be stored in your browser only with your consent. You also have the option to opt-out of these cookies. But opting out of some of these cookies may affect your browsing experience.
Necessary Always Enabled
Necessary cookies are absolutely essential for the website to function properly. These cookies ensure basic functionalities and security features of the website, anonymously.
Functional
Functional cookies help to perform certain functionalities like sharing the content of the website on social media platforms, collect feedbacks, and other third-party features.
Performance
Performance cookies are used to understand and analyze the key performance indexes of the website which helps in delivering a better user experience for the visitors.
Analytics
Analytical cookies are used to understand how visitors interact with the website. These cookies help provide information on metrics the number of visitors, bounce rate, traffic source, etc.
Advertisement
Advertisement cookies are used to provide visitors with relevant ads and marketing campaigns. These cookies track visitors across websites and collect information to provide customized ads.
Others
Other uncategorized cookies are those that are being analyzed and have not been classified into a category as yet.
SAVE & ACCEPT